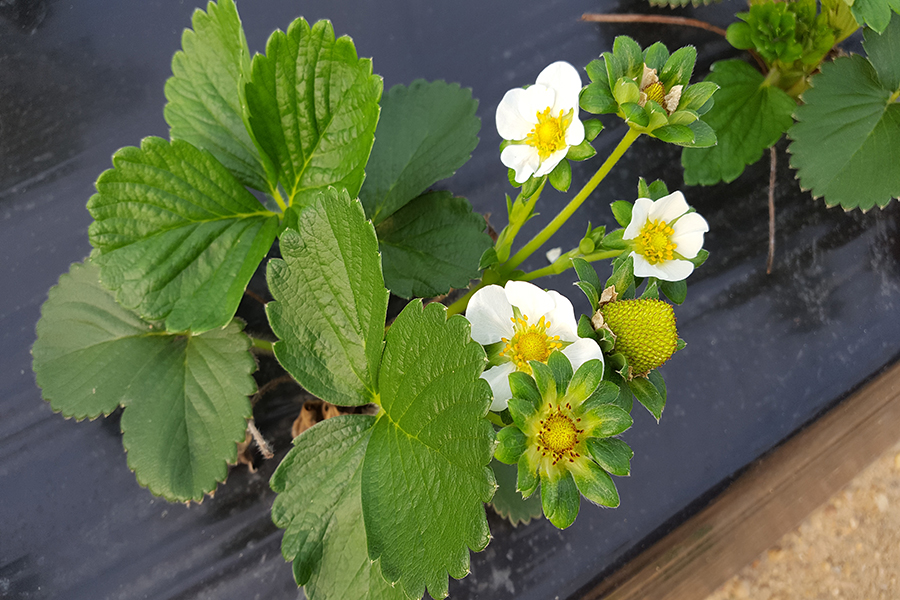 Grufesa, a company based in Moguer, Huelva, devoted to the production and marketing of berries, will have the first strawberries of the season in just a few days, as the flowering of the earliest varieties, planted on the 500 hectares of its partners, has already started.
In the coming days, these flowers will become strawberries, which will gradually acquire the characteristic red colour that heralds the beginning of a new campaign, after months of work, to offer the customers a tasty, healthy and quality fruit.
Grufesa’s technicians have previously been to the nurseries to control the selection process that guarantees the production of a fruit meeting the highest quality standards, and hundreds of operators have been in charge of collecting and preparing the best plants for their quick transport in cold storage to Moguer, where a large contingent of workers has sown the plants that are now flourishing.
“After carefully selecting the best plants in our nurseries and planting them in Moguer, the care of our partners leads to a flowering that announces the arrival of the first strawberries in just a few days,” assures Diego López Vergara, who is in charge of planning and coordinating the entire process as technical director of nurseries at the company. His obsession is “to seek the maximum quality for Grufesa’s strawberries,” as well as an optimum yield.
The harvesting, sorting and planting stages are all carried out in the framework of the company’s commitment to delivering the high-quality, safe and sustainable production, that has allowed it to become a leading name in the sector as a strawberry specialist.
Such production methods have earned it the recognition of being the first company in the world that has managed to certify its entire production with the Add-on Food Chain Partnership module of Bayer CropScience, an additional certification to the standard GLOBAL GAP. Thanks to this, 45% of last year’s production was zero waste, with the rest complying with the current legislation, staying well below the maximum residue limits (MRL) legally established by the EU.